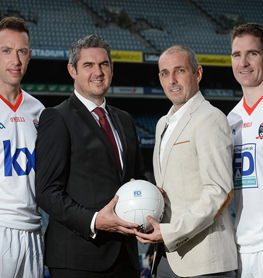 First Derivatives (FD), a leading provider of products and consulting services to some of the world’s largest finance, technology and energy institutions, announces its 6th consecutive year sponsoring the Asian Gaelic Games. The Company will be a Platinum Sponsor for this year’s event, which is held in Bangkok from November 17th – 19th, making First Derivatives one of the highest profile sponsors at the tournament. Given the success of its product division, the Company will lead with it’s Kx Technology brand across all marketing material going forward.

FD’s ongoing decision to sponsor the games has been a clear indication of their ambition to increase visibility and operations in the Asian and Australian markets and to further leverage the ever growing Irish Diaspora.  With existing clients in Singapore, Hong Kong, Tokyo, UAE, Sydney and Malaysia, which are supported by young Irish FD consultants working in the region, the decision to sponsor the games this year again was an obvious one. Further to this, the Company’s exciting new, Explorers Graduate Programme, will send a number of young Business Development representatives to Dubai, Taipei, Seoul, Hong Kong and Sydney in the next number of weeks. Also, FD has announced a major upgrade of their office in Singapore, with an impending move to 352 sq metres of floor space in the flagship Raffles Quay, North Tower.

With an average employee age of 26 among its 1800+ staff globally, First Derivatives’ links with sport and with the GAA in particular have been well documented. Brian Conlon CEO of First Derivatives was himself a senior county footballer for his native county Down. There are a number of past and present inter-county players within the company’s ranks and the social connection afforded by sports bodies such as the GAA allow the Company’s staff to feel home from home when seconded overseas. Across the globe the Company boasts male and female players with teams such as the Manhattan Gaels, Hoboken Hurlers and Armagh NY in the US, Thomas McCurtain Mens and Ladies teams in the UK, Stockholm Gaels in Sweden, St Pat’s Toronto in Canada and the Singapore Lions, Hong Kong Dragons and the Tokyo Gaels in Asia.

Brian Conlon, FD CEO stated that: “The Company sees the sponsorship of the AGG each year as an ideal investment opportunity as it recognises the cross-over between sport and business coupling the tournament with the Asia-Pacific Ireland Business Forum, offering a unique networking and recruitment opportunity. Furthermore we are proud to continue to contribute to the Global GAA family, and apart from the clear business benefit, we also want to support the activities of our global workforce. The GAA is an excellent social network for our staff, helping them to establish friendships and networks as we deploy them to various cities globally.”

Joe Trolan Chairman of the Asian Board quoted: “The ACB are once again delighted to have First Derivatives as a major sponsor of Annual Asian Gaelic Games in Bangkok, Thailand. This year marks the 22nd year of the games and they have been getting bigger and more competitive every year. We are back in Bangkok for the first time since 2009 and we are really looking forward to going back. Since 2009, the level of the games has continued to improve, but more importantly, the diversity of the participants has continued to increase every year with many more women and locals picking up the game for the first time. This growth has been fuelled by the support of First Derivatives and it is hoped that we can continue the relationship in what has become one of the most exciting and fastest growing Gaelic sport tournament outside of Ireland.”

Aogán Ó Fearghail’s President of GAA added: “One of the great success stories of the GAA is recent times has been the growth and expansion of the Association overseas, typified by the success enjoyed by the Asian County Board and the development of Gaelic Games in the region. The GAA is not just a vital sporting and cultural outlet for our Diaspora across these 420 Clubs, but also an invaluable community resource and support network for Irish people in business abroad. I want to congratulate the Asian County Board of the GAA and First Derivatives on this ongoing partnership and have no doubt it will prove mutually beneficial.”

FD is a global technology provider with 20 years of experience. The Group’s Kx technology is used by some of the world’s largest finance, technology and energy institutions. FD employs over 1,800+people worldwide and has operations in London, New York, Stockholm, Singapore, Hong Kong, Tokyo, Sydney, Palo Alto, Toronto, Philadelphia, Dublin, Belfast and its headquarters in Newry.